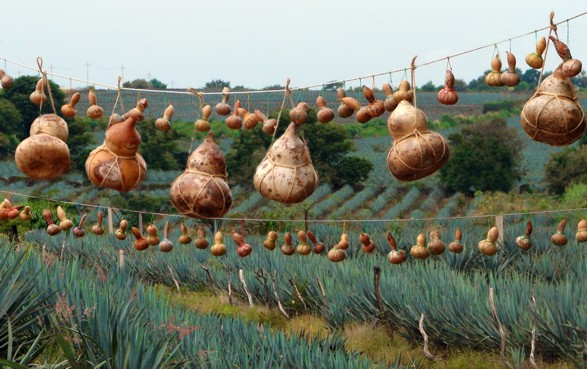 Agave is an old Greek word that refered to a goddess of fertility. Today this word is used to name a family of plants. In Mexico the goddess of fertility was named Mayahuel, the godess of the 400 breasts. She was known as the god of the pulque. There are over two hundred species of agaves but only four of them are recognized to been able to produce alcohol. Out of them four only one is known to make tequila. The name of this agave plant is name Tequilana Weber Agave blue. Blue because when you see it from a few feet apart it looks like its blue. What it makes it appear blue is this cape that is on the stalks of the plant. This cape also helps the plant to protect it from the sun rays, and the plague. It was named Weber because in the 1910s a scientist named France Webber came to our country and named the plant after his name. Before the plant was renamed it was known as Mayahuel “pulque goddess”, she remains most strongly associated with the plant as the source, rather than pulque as the end product.

The agave is a unique plant. What it makes it so special is the years it takes to grow and mature. It takes 12 years for this plant to grow. The older Agaves reproduce tillers, after two years of the tillers age they get replant. After they get replant we have to wait another 10 years to be able to cook and get at least one drop of alcohol. Is a really long time we have to wait, but it is worth the effort. When the plant is ready to be jimada (harvested) the jimador cuts all the stalks of leaving just the heart of the plant. The heart of the plant looks like a pine apple. When the harvest has enough pine apples ready for a load they load up the truck and transport them to the distillery for the cooking process.

Once they get to the distillery the pines get cut in half before the workers place them inside the ovens. Each oven holds up to 22 tons of pines, and cooks them in a period time of 12 to 14 hours. Then the pines after been cooked are submitted to the squeezing process. Here at this process is where the machine squeezes all the goods out of the pine. The goods are taken to a stain steel container. Each container is capable to hold up to 30,000 liters. When the liquid is inside the containers we now have to wait 36 hours to be able to move on the next step. The next step is distillation.

At the distillation the alcohol is obtained and the water separate. The liquid is placed in to the alambiques in a temperature of 90 to 110. We go through the distillation process two times. Among the reason we do it two times is because on the first time we only get 20 to 25 % of alcohol, and on the second distillation we obtain 50 to 55% alcohol.

It takes a really long time to produce tequila and that is why I think we should learn to appreciate the value of the tequila. We need to know the proper way of drinking it, and the different kinds of tequilas.

If you are interested in learning more about this fascitating subject and looking into the secrets of how the flavors are obtained, I am more than happy to prepare a special visit to one of the 120 tequila distilleries in this area.